Attention all Snowbirds! The Imperial Dam Long Term Visitor Area (LTVA) is officially closed. Hope to see you all back here when it reopens for the winter season on September 15, 2019.

This winter season we arrived at the Imperial Dam LTVA on November 11, 2018. As we did during our last winter season visit here (2015 / 2016), we will join several other snowbirds who adhere to the philosophy of stay-till-it-closes, and depart in the morning on Tuesday, April 16, 2019.

We spent 156 days at the Imperial Dam LTVA. The flat-rate camping fee of $180.00 covers the period September 15 through April 15. Therefore, our cost to camp here was $1.15 per day. With amenities that include flush toilet restrooms, pay showers, water spigots, dump stations and trash dumpsters it is no wonder that thousands of snowbirds flock to this area in the winter.

We prefer to stay at the Imperial Dam LTVA, for the amenities offered here and its close proxcimity to Yuma (about 25 miles). Of course mild, sunny, rain-free weather is definitely a deciding factor in selecting this location in the southwest region of the U.S.

It is always interesting to see the many different types of camping units used by other campers to accommodate their mobile lifestyle. As in our past visits, we observed self-made utility trailer units, pickup truck campers, camper vans, pop-up campers, travel trailers, 5th wheel trailers and motorhomes. Once again, there were the more unusual campers:

During this visit there was a large contingent of ham radio operators that set up their campsites in the Hermans Horse Path section at Imperial Dam LTVA. It was interesting to watch them as they set up their radio antennas (probably 30 to 40 foot high). We subsequently learned there is a ham radio convention that takes place in Quartzsite, AZ in January that quite a few of them attend.

When we arrived in early November 2018, there were a lot of open campsites to choose from. By late December and early January a majority of the campsites were occupied.

According to local weather reports, this was the coldest winter season recorded in Yuma in the past 100 years. We can attest to that report! It was cold, with nighttime temperatures dipping into the 30s, but compared to the frigid weather back home in Illinois, we were'nt about to complain. The wind became another factor. We experienced several days each month with wind gusts of 20 plus miles per hour. With low daytime temperatures plus the windy days, we spent more days inside than we did during our last stay here. Such is life in the desert... just go with the flow!

We made new friends and enjoyed visiting with friends from our previous visits. Sadly, we had two campers that passed, but we reside in the belief their spirit lives on with those that knew them.

We depart this desert environment with a feeling of nostalgia. Save us a spot... we wil be back!

Posted by CasitaCamper at 11:05 AM No comments: Links to this post

Today was one of those less than pleasnat days camping in the desert.

On Wednesday, milder temperatures will be in the low 80s with strong winds coming out of the northwest at 15 mpg with gusts up to 20 mph.

By Thursday, milder temperatures will continue in the low 80s with milder winds coming out of the north at 8 mph with gusts up to 10 mph.

Fortunately, our small fiberglass trailer is quickly cooled during hot weather with a roof-mounted air conditioner, powered by a EU2000i Honda generator. Yep, you betcha... we had the air conditioner on this afternoon!

Such is life living in the desert!

Now consider this; just 205 miles north of us is Prescott, AZ, residing at a elevation of 5,400 feet. The temperature there was 77º.

Posted by CasitaCamper at 11:02 AM No comments: Links to this post 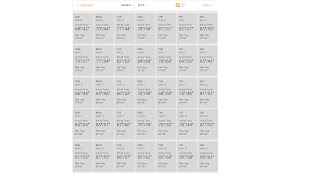 Posted by CasitaCamper at 5:00 PM No comments: Links to this post

Sharon returned from Illinois after spending three weeks there caring for her older sister. I picked her up at the Sky Harbor International Airport upon her arrival at 8:00 pm. Her flight on Southwest Airlines was delayed due to a mechanical problem with the aircarft. After Southwest employed another aircraft, as well as a gate change, Sharon finally arrived about one hour late from her originally scheduled arrival. Our faithful companion, Bella (our sweet little Shih Tzu) joined me in a joyful reunion, welcoming Sharon back into our family unit.

We finally arrived at our campsite at the Imperial Dam LTVA at 12:30 am, Sunday morning, completing a 200 mile trip from Phoenix.

Posted by CasitaCamper at 11:01 AM No comments: Links to this post

For many of us in our senior years, the aging process imparts a sense of purpose, with the knowledge that we have a finite number of years remaining on this blue sphere of a planet we call Earth. Our Earth is just a tiny dot in a Solar System that resides within the Milky Way Galaxy. Our Solar System consists of a gravitationally bound planetary system of the Sun (star) and the objects that orbit it, directly or indirectly. The Milky Way is the galaxy that contains our Solar System. It is a spiral galaxy that contains more than 200 billion stars and is 100,000 light years across. The Milky Way Galaxy is contained within the Universe. The Universe consists of all existing matter and space considered as a whole. The Universe is believed to be at least 10 billion light years in diameter and the observable Universe contains about 100 billion large galaxies. At the present time Earth is the only astronomical object known to harbor life. In this context, who among us can dispute the miracle of life, as we know it, and not vow to live each day in service to one another.

In our retirement years, some of us seek new adventures as we travel throughout the United States in our recreational vehicles. One such individual was a gentlemen from the state of South Dakota who would spend the winter at the Imperial Dam Long Term Visitor Area each year. He lived alone, in his 5th wheel trailer. During our previous two visits to this area, we had occupied the same campsite. He had occupied another campsite about 100 yards northwest of our campsite. We would pass one another in our vehicles on occasion and we would wave to one another.

At around 10:00 am on Friday, March 15, 2019, I noticed a campground host escorting an Imperial County sheriff to this gentlement's campsite. Within a short period of time an Imperial County fire truck arrived with two firefighters and another Imperial County sheriff arrived shortly thereafter. It soon became apparent the gentleman had passed. The firefighters and sheriffs were standing outside of the trailer just talking to one another. Around 11:00 am the two sheriffs departed. The firefighters remained on the scene, inside of their vehicle. At 12:45 pm the coroner arrived in a small, unmarked, white van. The firefighters and the coroner removed the gentleman from his trailer and placed him in the white van. I said a prayer for the gentleman as the van passed by our campsite. May he rest in peace. Another miracle of life has departed the Earth and begun a new adventure exploring the Universe.

Update:
During the late morning on Saturday, March 16, 2019, family members (sister, niece and nephew) arrived from the southern California area to retrieve his trailer and other personal belongings. Several of us campers offered our condolences and offers of assistance to the family. His first name was Bruce. He was 75 years old. His wife had passed away six years ago. He and his wife both enjoyed their winter visits to the southern Arizona desert. Bruce had developed friendships with several other campers, one of whom had literally saved his life when he experienced a medical emergency during a previous winter sojourn. Unfortunately, this time Bruce was alone in his trailer when a medical event took place that claimed his body. His spirit surely survives as a wonderfully memory to those who knew him.

Posted by CasitaCamper at 4:24 PM No comments: Links to this post

Sharon is returning to Illinois to visit with her older sister who is recovering from an injury to her right leg. She will spend three weeks there caring for her sister.

We spent Friday night at a hotel in Elroy, AZ, (60 miles south of the Sky Harbor International Airport in Phoenix). This was a convenient location for a short drive to the airport on Saturday to catch an 8:25 am flight on Southwest Airlines. Had we not spent the night at the hotel, we would have had a 200 mile trip to the airport from our campsite at the Imperial Dam LTVA near Yuma, AZ.

Around 9:00 am I received a text from Sharon that she had missed her flight. Southwest had changed departure gates on short notice, a considerable distance from the original departure gate. Sharon along with several other aggravated passengers were not able to get to the new gate in time. Southwest rebooked Sharon on a later flight that departed at 2:25 pm.

Sharon finally arrived at her destination about six hours late from her originally scheduled arrival. Thankfully, her brother and nephew were so very kind to remain at the airport until Sharon arrived.

Posted by CasitaCamper at 10:59 AM No comments: Links to this post 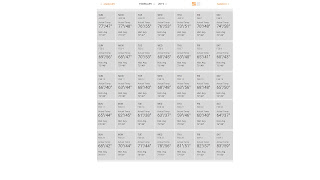 Posted by CasitaCamper at 4:16 PM No comments: Links to this post

The Bermuda Fire that I reported on in our blog of 02/17/19 appears to be under control. The wind has subsided today, so I'm sure that will have a beneficial effect to extinghuish the fire. 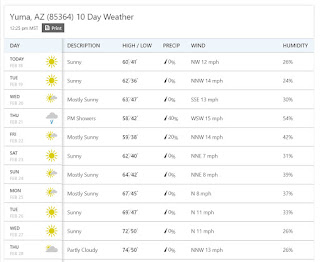 However, sunny weather will continue to prevail with a couple of rain showers forecast for Thursday. The sunny weather here in Yuma makes it feel warmer than the actual temperature. This weather still beats the cold, snowy weather back home in northern Illinois.

Tomorrow another adventure begins.
Posted by CasitaCamper at 11:37 AM No comments: Links to this post

Yesterday morning we awoke to see a large cloud of gray dense smoke in the distance. 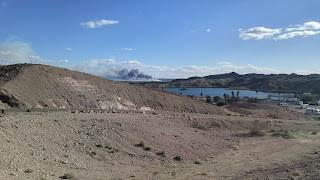 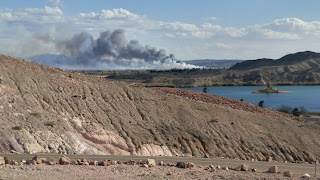 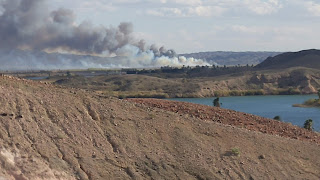 We later learned the fire was designated The Bermuda Fire. The fire spread rapidly, fueled by a windy day, with 10 mph winds gusting to 15 mph. The fire was consuming a section of the Mittry Lake area, located east of CA-S24 and south of Imperial Dam Road. 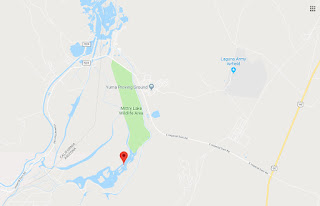 The Yuma Proving Ground (YPG) fire department had firefighters and equipment on the scene and were monitoring the situation. News reports stated the Bureau of Land Management (BLM) have devoted significant resources to fighting the fire but have not requested assistance from the YPG Fire Department.

Last night we were treated to a spectacular and at the same time, disconcerting sight. We could see the red glow of the fire off in the distance, along with the red flashing lights on the firefighting equipment. We were comforted by the fact strong winds were blowing out of the northwest, which blew the fire away from our location. 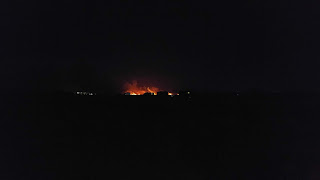 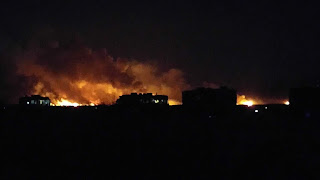 This morning it appeared the fire had diminished somewhat, but increased winds throughout the day appeared to cause the fire to flare up and spread. Hopefully, BLM will have the fire under control within the next day or so.

Posted by CasitaCamper at 4:11 PM No comments: Links to this post 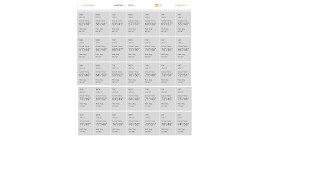 Posted by CasitaCamper at 3:17 PM No comments: Links to this post