We spent a delightful, sunny day, with the temperature in the middle seventies, exploring the Petrified Forest National Park. Visitors to the park follow a 28-mile park road for an amazing journey; reminiscent of a landscape on another world. 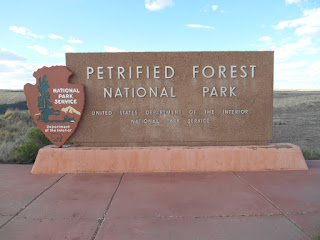 Ancient Arizona was a hot, humid, lush green environment. During the Triassic Period, 225 million years ago, this was a tropical landscape with abundant vegetation. Early dinosaurs and reptiles roamed the area; fish, clams, snails, and crayfish moved through rivers; giant, 180-foot conifers reached to the skies.

Over the past 200 million years continents moved, regions uplifted, climate changed, and the river system, along with its plants and animals, was buried by layers of sediment. Wind and water have continually molded, sculpted, and peeled back these layers, providing a glimpse of the once tropical land that occupied this region of Arizona.

Petrified wood, remnants of a prehistoric forest, sparkle like precious gems in the sun, as they dominate the landscape in some regions of the Petrified Forest National Park. Colorful specimens, from small shards to massive trunks are strewn across the landscape. In some areas of the park, fossilized trunks are visible, in other areas they remain hidden, still buried under layers of soil and rock. As the trees died or were knocked down by wind or water, many were carried downstream and buried by layers of sediment. The sediment consisted of: silt, mud, sand, and volcanic ash, which protected them from decay. Mineral-laden ground water percolated through the layers, carrying silica from the volcanic ash and other trace minerals. The absorbent dead wood became saturated with these minerals. The silica, or quartz, crystals slowly bonded with the cells of the tree replicating the organic material in perfect detail. Eventually, silica replaced the wood material. The different minerals create the rainbow of colors seen in many specimens.

The Petrified Forest National Park protects hundreds of significant archeological sites. Humans have been living and working here for the past 13,000 years. The record of human occupation ranges from small single-room field houses to villages where hundreds of people lived. Phenomenal rock art sites are scattered throughout the park.

Posted by CasitaCamper at 9:29 AM